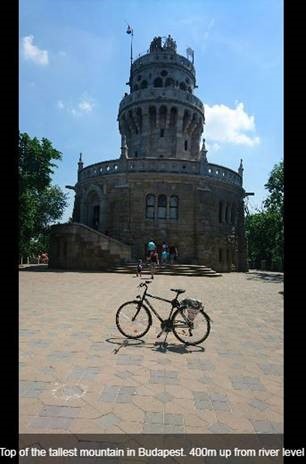 Way of life for living in the “city”

Budapest is a relatively large city split in half by the Danube river. It’s population is about 1.8 million. It is primarily split into the “Pest” side which is on the east and is relatively flat and contains the cultural areas and then the “Buda” side on the west which is less developed and more mountainous. I found the train and tram system in Budapest quite good and very cheap (incomes are relatively low there). Many people use this to get around and I found that many people don’t own cars and they are expensive to maintain there. There is quite a good government run (docked) bike share program that also operates that is used quite a bit. I noticed it often gets used by younger people as its cheaper than public transport and particularly late at night when the train/trams don’t come as frequently. It’s possible that the bike share system is deliberately used by government as a way to reduce the cost of running low utilized public transport at night. Budapest is also in the middle of the EuroVelo 6 route that runs from the west coast of France to the east coast of Romania so there are many heavily loaded touring bikes traveling through the city and on the paths.

Budapest has quite a large dedicated bike lane infrastructure in the central city areas. I didn’t notice any obvious bias in the bike traffic signals while I was there so I suspect they were better than Sydney but not as good as Tokyo or Bern.

I didn’t have any contact with traffic police and was not advised of any issues by colleagues.

I found car driver behaviour to be very good. This is partly because its very hard to drive in Budapest central city so there aren’t many cars anyway. Even out in the country side I didn’t have any issues either. There are a few motorways that cyclists avoid (kind of live Sydney’s F3 vs Pacific Hwy) which does help but in the relatively small number of contacts I had with cars most drivers seemed fine (much better than Sydney).

Helmets are not compulsory in Hungary. People riding sporting bikes will almost always wear helmets but they are basically non existent on city share bikes. I did also notice that are relatively high number of people riding touring bikes also didn’t wear helmets.

My accommodation was always within walking distance to the office so I often walked but I did occasionally take the bike share bikes to see what they were like. Most people in the office would use public transport to get to work. A relatively small number of people would ride to work but it was much higher than what I’m used to in Sydney.

Most of the bikes that I saw around the city were either bike share ones (very solid, upright, 3 speed internally geared hub, swept back handlebars) and touring bikes (mainly flat bars or butterfly bars, triple chain rings and low gearing with front and rear racks with panniers). Riding out on the weekends I would also see some racing style bikes as well.

Just over a week to go for the public exhibition of the Sydney Harbour Bridge Cycleway Northern Access Project with three ramp design options and upgrade to bike path connections. Reminder: the exhibition closes at midnight on Sunday 16 January. There is a pop-up event scheduled for Wednesday 12 January 2022, 4-6pm at the foot of the North steps. This … END_OF_DOCUMENT_TOKEN_TO_BE_REPLACED

Work on noise walls in Cammeray will close bike lane access to Amherst Street from Brook Street, Naremburn. The closure is scheduled to be in place on Thursday 6 January for up to nine months. Alternative routes are shown in map image. These works should not impact on bicycle access to Amherst Street from the end of the Naremburn cycleway. … END_OF_DOCUMENT_TOKEN_TO_BE_REPLACED

Happy New Year to Bike North riders.  These are interesting times that we live in. Due to the severity of the current Omicron/Covid 19 situation in NSW, Bicycle NSW has, in the last few days, made some recommendations based on NSW Health Order and health and safety concerns.  As it happens, Bike North is already complying with most of the … END_OF_DOCUMENT_TOKEN_TO_BE_REPLACED

A number of gallant souls braved the elements to come to Nowra on 9th-12th December. Some also decided the weather was against them and chose not to come. On a couple of occasions some of us thought that this seemed to be a wise choice.But, to be honest, most of the time the weather was horrid all around Nowra but was … END_OF_DOCUMENT_TOKEN_TO_BE_REPLACED