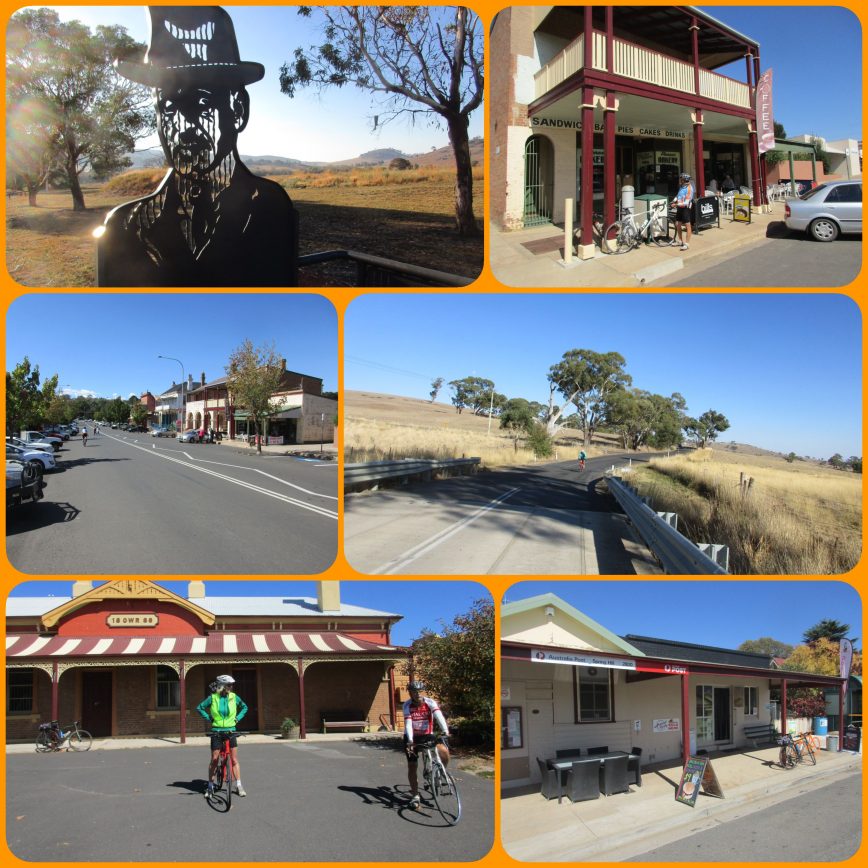 Having really enjoyed Cowra this Easter we decided to join Phil Burge, as he was travelling to Orange, to check and see if it was possible to put a weekend on like Cowra and Mudgee.  We went to the Tourist Information Centre in Orange and got a few maps.  We were pleasantly surprised by the Town Centre, as there seemed to be enough eating and drinking facilities for all tastes.

We had a look at the map and decided to ignore the brochure from the tourist information and go to an area where there were no rides showing.  Sure, the first bit was hilly but not too bad, and then we had to go on a dirt road.  Willemina had left us some kms earlier to get a head start on the dirt, as we checked out an area a bit further.  That also ended up in a dirt track, so we turned around and followed Willemina’s tyre tracks.  We all had to walk at different times up or down the hills, because some of them were too steep for our skinny tyres.  We then ended up in Lucknow and decided this was not a goer.  After discussions at coffee we made our way to Millthorpe which was a much more pleasant way.  After another coffee stop we made our way back to Orange.  The original Millthorpe Loop is 50 kms and very enjoyable with undulations but nothing major in the way of hills.

We decided to start from the official starting point and do a short detour and follow the Lake Canobolas ride that Willemina was going to do.  We got hopelessly lost and abandoned the idea and decided to do the ride that was originally planned.

The ride was lovely with some good undulations to Molong.  Molong is quite a nice town with a few different options for coffee and food.  We had a look around town and enjoyed a coffee before our return to Orange.  I got the feeling that this area is being looked after by a different Council as the roads were much more enjoyable to ride on.  On the return we encountered a couple of serious hills that made the ride quite challenging.

Willemina in the meantime decided to follow the signs to Lake Canobolas,  As she is what is known as geographically challenged, she tried to follow the maps and the signs that appeared after a few kms, but after another few kms got hopelessly lost.  She did find Lake Canobolas in the end but made sure she asked for directions before she left.  She was then going to follow two short rides around town as we had seen the signposts for them.  Unfortunately, she managed to get lost again on one of them and then decided to try the one to the Botanic Garden.  She did manage to do this ride almost all the way.

As my legs were too tired after the previous day, I did not really want to get back on the bike but I just told them to shut up and decided on the shortest version. As Phil wanted to check out all options, he did some of the area by himself and reported back later that some of it was quite steep.  Happy to have missed out on those hills.  Another lovely area to cycle in, there were some undulations and yes where the sign mentioned reduce speed I walked up the hill.  Willemina did manage to ride up that hill and the last hill to the lookout in Dalton Road and then it was a downhill to the coffee shop and back to Orange.  We only managed 30 kms, but Phil did 60 kms

On the way home we decided to do drive part of the Panuara Loop and Tallwood Loop to make our way to Millthorpe for our coffee.  It was a lovely scenic area to drive.

After cycling in Cowra I am very pleased to report that we did not see any of the “cat-eyes” as experienced in Cowra.

Orange Council provides a booklet *Do It Ride Orange Guide* which also has files that you can download to your Strava.

We will certainly go back to Orange to do some of those rides again.

BEFORE YOU VOTE – Saturday’s Council Elections

Have you checked what candidates in your Council Ward have said about cycling?    On this page, Council elections – Be Part of the Solution (bikenorth.org.au), on the right-hand side, use the pull-down menu to find your ward, then click on the “search” button to see the candidates and what they said about cycling.   There are plenty of responses to our questions, e.g. … END_OF_DOCUMENT_TOKEN_TO_BE_REPLACED

Unsold Stuff! Polar V650 bike computers (used & now superceded). Two used, but still working, bike computers with cadence and speed sensors. Everything is a few years old and the batteries in the sensor are not user replaceable so no guarantees on life left. There is also a third computer with a crazed screen but it still works. $50 each … END_OF_DOCUMENT_TOKEN_TO_BE_REPLACED

There are still a couple of places available for any of the four rides 9th-12th December. You don’t have to come on all the rides. Come on one, two, three or four rides. But booking is essential and the rides are only open to Bike North members.WeatherThere is no flooding in Nowra, but one ride crosses a creek that might be … END_OF_DOCUMENT_TOKEN_TO_BE_REPLACED

‘Nothing beats … seeing the smiles of passengers coming back from their first ride with wind in their hair, rosy cheeks and full of stories.’ Cycling Without Age (CWA) riders take aged care home residents out in a trishaw around local bike paths. It is a great outing and an opportunity for the residents to tell their stories and share … END_OF_DOCUMENT_TOKEN_TO_BE_REPLACED

Free early generation smart trainer, comes with dozens of rides like Alpe d’Huez, Galibier, Ventox etc. It was running happily run on my Windows 10 laptop. Doesn’t do Zwift, Internet etc – but a keen wireless programmer could come up with something to interface – I seem to recall seeing someone on the Internet that was working on a solution … END_OF_DOCUMENT_TOKEN_TO_BE_REPLACED

Polar V650 bike computers (used & now superceded) . Two used, but still working, bike computers with cadence and speed sensors. Everything is a few years old and the batteries in the sensor are not user replaceable so no guarantees on life left. There is also a third computer with a crazed screen but it still works. $50 each set … END_OF_DOCUMENT_TOKEN_TO_BE_REPLACED