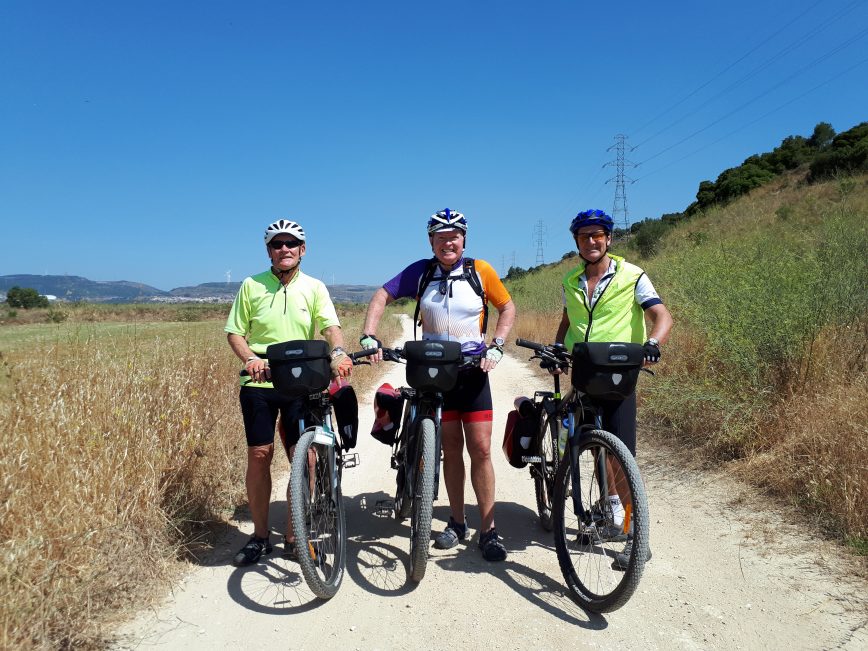 It seemed like a good idea for four of us to ride the Camino trail from Lisbon in Portugal to Santiago, Spain. The other three had ridden overseas before and the presentation from U Tracks seemed to indicate it would be a good scenic ride of 634km over 14 riding days with two additional rest days. Hired mountain bikes, luggage taken from hotel to hotel and not too many km’s each day seemed attractive.

This is one of a number of Camino trails, which trace the paths of the pilgrims to the supposed burial site of St James in the first century at Santiago.

Due to illness we were reduced to three, meeting up in Lisbon where the Camino Portugal commences. On day 2 we were taken to the bike shop and collected three new Merida Big Nine MTB’s with panniers and front bag. Unfortunately, we were at least 14km from town, spoke no Spanish and all of our instructions didn’t give us a clue how to join the Camino, which is marked by yellow arrows commencing at the cathedral in central Lisbon. With the help of Google maps, initiative and a few local cyclists, we found our way to our first arrow then followed these for 634km to Santiago.

The Camino Portugal is mainly a walkers’ track and has only been promoted as a cycling option since 2016. It uses every possible track available to keep walkers off significant sealed roads. If riders find themselves on a delightful downhill tarred section, there will be a sneaky turn off the road onto a single track, lined with blackberry bushes and covered in broken tiles or loose rocks. Climbs of over 15% on loose rocks are a regular occurrence. At one point, we had to haul the bikes up a mountain side for 2km, one boulder at a time. With more understanding of the track, we may have been able to plan a route around the two or three worse sections, but nothing alerted us to the issue until we stood at the bottom of the hill, with the arrow pointing the way. In addition, doing the actual trail through mud, dust, dirt and rocks is something that makes the Camino special.

Between Lisbon and Porto, there are few walkers, and our beloved yellow arrows are inconsistent. You may get arrows on every post along a narrow, stone wall lined backroad then, coming to a five way roundabout, have nothing to show the way. After Porto, the track is more used, with possibly 400 walkers a day being passed. Signage was also better but far from perfect.

Our trip was a package, so all accommodation, breakfasts and most dinners were included. We stayed in small B&B’s, where dinner and breakfast were in the only bar in the village, through to exquisite establishments built inside Roman forts.  At one point we were asked for €2.00 room tax, in another, litres of wine were provided free of charge.

Along the way, we rode through farms with various crops, along Roman roads, through villages which were as sleepy as they were centuries ago, and dealt with traffic around some of the larger cities.

The camaraderie along the track was amazing. Everyone was facing the challenge of their own Camino. In the square in front of the Santiago Cathedral, walkers and riders poor in every hour and release their euphoria at completing their Camino. It beats Disneyland to the title of the happiest place in the world.

Would I do it again? No I wouldn’t. I have done the Camino and respect it whilst, strangely, I feel it respects me for being there. Would I recommend it? Definitely but only to strong riders, with some MTB experience and the willingness to work together to achieve a worthwhile goal.

If any Bike North member is considering this ride, I would be happy to discuss it further.

Come and join us on the Big Rides Day on Sunday, 14 August.  Then, stay for lunch and the Annual General Meeting. Let’s make it a big one.  Last time we had 91 people register; let’s see if we can break 100! Go to the Calendar now and register now for one of the many rides on this day.  All the rides … END_OF_DOCUMENT_TOKEN_TO_BE_REPLACED

Our ‘Local Hero’ needs your help!

Please vote for John Kelman in the Westfield Chatswood Local Heroes Awards.  (Here is where to vote.) John has been leading our Cycling Without Age initiative, where our members take residents of aged care facilities out for a gentle ride on a ‘trishaw’.  The passengers come back with huge smiles, having enjoyed a marvellous experience, with the sun on their … END_OF_DOCUMENT_TOKEN_TO_BE_REPLACED

Try the Trishaw at the Big Rides Day!

Come for a ride on the Cycling Without Age trishaw – the one that we have been using! John Kelman and some of the other pilots will be giving members rides around Olympic Park at the Big Rides Day, Sunday 14 August. There is no need to register; you can get a ride when there is a spare space in … END_OF_DOCUMENT_TOKEN_TO_BE_REPLACED

Canterbury Bankstown Council is undertaking upgrades works to the intersection of Canterbury Road, Charles & Close Streets and the Cooks River shared path underpass.  Council will commence work to upgrade the Canterbury Road shared path underpass on Monday 22 August 2022. During the upgrade Council will close the underpass and recommends cyclists use the detour route outlined on the attached … END_OF_DOCUMENT_TOKEN_TO_BE_REPLACED

We look forward to welcoming you at Bike North’s Annual General Meeting, which will be held at the Egret Pavilion, Olympic Park (near Victoria St) on Sunday 14 August, starting at approximately 12 noon. At this AGM, we will be receiving reports on our activities for the year, celebrating three Volunteers of the Year and electing the new members of … END_OF_DOCUMENT_TOKEN_TO_BE_REPLACED

Like to have a wonderful memory of the Tour de France, and its exciting moments ? This is The Peleton, by renowned copper sculptor Vaughan Robinson. A great memory to have on your wall, of both the Grand Tours and your own cycling enjoyment 120cm wide by 56cm high. For Sale $1200 ono Clive – 0403 055 166