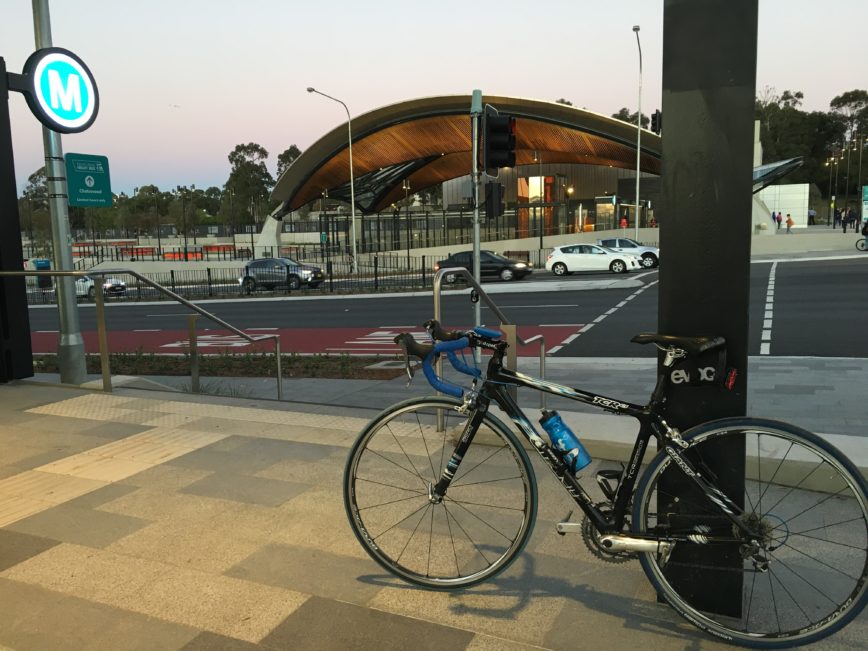 Sydney Metro North West opened last Saturday after much anticipation from residents in the Hills region that had long been waiting for a decent train service. Although there were a few minor glitches on the day, the scale, complexity and logistics of this project is to be commended, especially as it was delivered under budget and earlier than predicted. Not only will the service from Tallawong (just west of Rouse Hill) carry commuters to Chatswood, where they can change trains for the CBD, but it opens up the NW to more cycling exploration than ever before. Here is a link to the metro map.

The line is underground from Chatswood to Bella Vista but from there it rises majestically above ground as a skyrail with spectacular views over the surrounds. From Bella Vista, a dedicated SUP runs alongside & underneath, allowing easy access to the stations west. All these stations, as well as the other new ones (Norwest, Hills Showground, Castle Hill and Cherrybrook) and revamped existing stations (Epping, Macquarie Uni, Macquarie Park, North Ryde & Chatswood), have main access to the platforms by high-speed escalators, but there are large lifts nearby which at the new stations, can easily fit up to 4-5 bikes at a time. Getting on the train is also made easier now as there is minimal gap (less than 10cm) between the platform & the carriage and no difference in height at all. The carriages are similar in design to the London Underground & Paris Metro trains in that they are one-level, open-space with only seating running down the sides. Currently there are 6 carriages per train and every 2nd carriage has a space for wheelchairs where 3 seats fold up.  The Metro has no timetable – it is turn-up-and-go. During peak hours, a train should arrive every 4-5 minutes but out of peak, there should be a train every 15 minutes. The same conditions apply as to the rest of the rail network when travelling with your bike.

All the new stations have capacity for bike parking according to the Sydney Metro information website although the final details for this have yet to be rolled out. At Tallawong, Rouse Hill, Kellyville and Bella Vista, there are free Bike Sheds. These are large caged spaces with bike racks inside. Access to the Bike Shed will be by Opal card-linked registration but you may still wish to bring your own bike lock to secure your bike to the rack. Some of the other stations have individual lockable Bike Lockers for rent. More info on bike facilities and how to register your card is here.

Via Sydney Metro NW, cyclists can now access the Windsor Road cycleway to go to either south to Parramatta or north to Windsor; access the new Schofields Road cycleway to Richmond Road at Marsden Park; and also access the myriad of cycleways through Baulkham Hills, Seven Hills, Kellyville, Rouse Hill, and can easily get on to the start of the 40km M7 cycleway at Norwest.

Bike North Honours System is a system established to acknowledge and celebrate the outstanding achievements and contributions of exceptional people involved in the sport of cycling. The System recognizes those people whose actions and commitment over a period of time are above and beyond what could be reasonably expected and who have made a significant difference by virtue of their … END_OF_DOCUMENT_TOKEN_TO_BE_REPLACED

Canada Bay’s BayBUG now has a YouTube Channel with videos about all things cycling. You can view the channel and subscribe HERE

Concord to the Bay Run plan

This $7 million regional cycling route will connect Concord with the Bay Run, enhancing safe connectivity through Five Dock and the rest of Canada Bay, to the inner west and Sydney CBD. This route is a key part of the City of Canada Bay’s new Bike Plan which is being developed for the entire area. Council are seeking community feedback … END_OF_DOCUMENT_TOKEN_TO_BE_REPLACED

Public exhibition of the concept design for the Chatswood to St Leonards Bicycle Route closes this Sunday 19 July.  This plan is to upgrade the existing shoulder lanes to a separated bi-directional cycleway along Hampden Road and Herbert Street.  More details at https://www.haveyoursaywilloughby.com.au/Chatswood_StLeonards_PBN.  This route is on the draft Principal Bicycle Network and the concept design, if approved, is a … END_OF_DOCUMENT_TOKEN_TO_BE_REPLACED

After being in hibernation for parts of March to May, the Bike North rides program under the Covid Safe protocols has hit a high mark of 56 rides in June. The second half of May has 28 rides and so far July has 28 rides. Typically for the past years the winter months average about 40 rides per month. There … END_OF_DOCUMENT_TOKEN_TO_BE_REPLACED