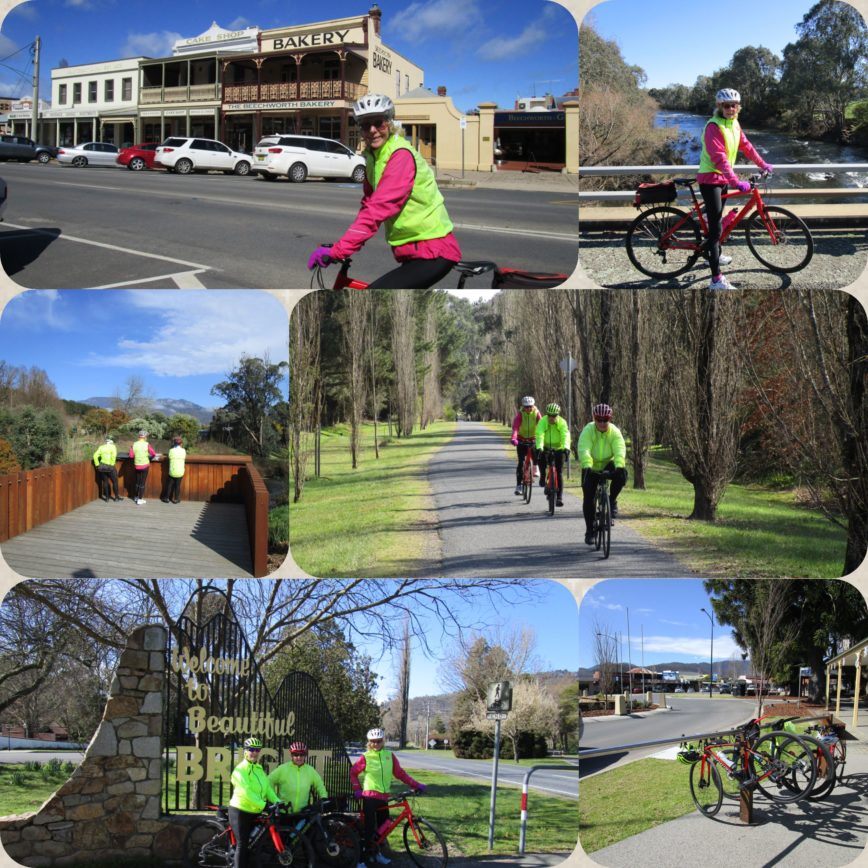 Some months ago Willemina and I were talking to Margaret and Fran about Amy’s Gran Fondo.  We always thought it would be wonderful to ride on The Great Ocean Road when there would be no traffic.  We decided to look into the distances and available accommodation and have a good think about it.  Margaret and Fran were thinking to start at the finish in Lorne, then ride to the start at Apollo Bay end return to the finish at Lorne, this would make it a 90 km ride.  There was also a 130 km official ride but that was out of our comfort zone.  Having listened to what Margaret and Fran had experienced on previous occasions I suspected that we had to park the car somewhat outside Lorne and cycle into Lorne which would make the ride possibly about 110 km.  We then did some research into available accommodation and found a caravan park at Aireys Inlet and decided to make a booking.

We then discussed driving from home to The Great Ocean Road and did not think it wise to drive that distance in one day, so we booked a caravan park at Wangaratta for a few days to revisit a section the Murray to the Mountains rail trail.  We mentioned this to Margaret and the two of them decided to join us on a few rides.

Unfortunately, we both had a nasty flu just before we left and lost most of our fitness, we were not happy!!!  So we added a few days to our stay in Wangaratta to get some more cycling in and increase our fitness levels.  On the drive down the further we got away from Sydney the drier it got until we got to the Victorian border.  We could not believe how green everything was in Wangaratta, with the grass quite high.

The first ride we did was on the rail trail from Wangaratta to Beechworth, which is just over 40 kms one way.  When we did the Everton to Beechworth section many years ago Willemina could not get up the hill and still thinks it is a hill.  Since doing the ride this time she just laughs at herself as there was nothing to worry about from her point of view.  And in Beechworth there is always the reward of a Beesting at the Beechworth Bakery (we went for coffee somewhere else).  It was extremely windy that day but we were mostly sheltered except for the last kms when we were more out in the open and exposed to the wind.  We encountered numerous Magpies on the ride, but most of them were not too bad.  Willemina experienced one really bad Magpie close to our caravan park that would not let up and was attacking from both sides for quite a long distance.

The next day we cycled with Margaret and Fran from Wangaratta following the rail trail signposts to close to Milawa for a coffee stop at the bakery.  We then followed different blue signposts to Everton Station and returned to Wangaratta on the rail trail.  It is always a very nice circle, a bit of sightseeing through Wangaratta and then farming country to Everton and back to Wangaratta on the rail trail.  This is quite a flat ride, about 65 km.  Willemina explained all about the Magpie that attacked her the previous day and said she would walk if it was doing its usual thing.  On the spot there were three Magpies sitting on the power poles and none of them looked at us.

The next day Margaret and Fran decided to do some sightseeing and we parked the car at Milawa and cycled to Myrtleford on the road, about 35 km.  The drivers were very good and gave us a good distance when overtaking, some sections we could ride on the shoulder but other areas not.  We had a coffee at Myrtleford and checked out if a little park was finished that they were working on in 40 degrees heat when we were there previously.  We discovered a monument to the tobacco growing farming that was a large part of their produce in years gone by.  We then decided to do the return on the rail trail to Everton and cycle back to Milawa, all up about 80 kms.  We encountered a few Magpies as usual.  Unfortunately, one had it in for me this time, I could not get rid of it and It was attacking me constantly for quite a distance.

The day after Margaret and Fran decided to join Willemina for the ride from Eurobin station to Bright.  I had to find something else to do as my knee was giving me a lot of problems and I could hardly walk.  I decided to be the official photographer and have a look around Bright.  There was still snow at the peak of Mount Buffalo.  We have been to the area quite a number of times now and it always draws us back.  The three girls had an enjoyable ride, Fran was leading on the way up and Margaret on the way back.

The day that we had to leave Willemina and I had to make the decision that unfortunately we would not be able to do Amy’s ride as my knee was too bad.  We decided to return home and make sure it would be back to normal as soon as possible to join our normal rides again.

We are very proud of Margaret and Fran for having completed Amy’s ride.  Fran cycled all the way to the start where she joined Margaret and both of them enjoyed their experience of the ride to get to the finish at Lorne.  Unfortunately, it was raining at the start and they thought the numbers were done because of this, but it cleared after a few kms and they made it back safely.

The State Government has released the EIS for the Beaches Link and Gore Hill Freeway Connection for consultation until 1 March.   https://caportal.com.au/rms/bl  . This is a major road project which will have major impacts on the lower North Shore and the Northern Beaches area. This follows on from the EIS for the Western Harbour Tunnel and Warringah Freeway Upgrade … END_OF_DOCUMENT_TOKEN_TO_BE_REPLACED

The Beaches Link EIS is now on public exhibition at https://caportal.com.au/rms/bl  and virtual information session commence this week. The first Virtual Information Session (Artarmon) for the Beaches Link will be held on Thursday 14 January, 4-5pm. You can RSVP for this session at https://caportal.com.au/rms/bl?hview=modalConsultationSession . In Artarmon Bike North is extremely concerned at the impact on the popular cycleway alongside … END_OF_DOCUMENT_TOKEN_TO_BE_REPLACED

The Beaches Link EIS is now on public exhibition at https://caportal.com.au/rms/bl  and virtual information session commence this week. The Virtual Information Session (Cammeray) for the Beaches Link will be held on Thursday 14 January, 5-7:30pm. You can RSVP for this session at https://caportal.com.au/rms/bl?hview=modalConsultationSession . The major area of concern for bike riders in Cammeray is for bicycle paths and bicycle … END_OF_DOCUMENT_TOKEN_TO_BE_REPLACED

The Beaches Link EIS is now on public exhibition at https://caportal.com.au/rms/bl  and virtual information session commence this week. The Virtual Information Session (Northbridge / Willoughby) for the Beaches Link will be held on Tuesday 19 January, 4-5:30pm. You can RSVP for this session at https://caportal.com.au/rms/bl?hview=modalConsultationSession . The major area of concern for bike riders in Northbridge/Willoughby is for the bicycle … END_OF_DOCUMENT_TOKEN_TO_BE_REPLACED

IMPROVED CYCLING ACCESS TO HORNSBY CBD Hornsby Council has put on exhibition its plans for the construction of a Shared User Path (SUP) from Galston Road, Hookhams Corner to Hornsby TAFE/Jersey Lane Hornsby which Council hopes to commence in February 2021. More information is available at :- https://www.hornsby.nsw.gov.au/council/noticeboard/works/infrastructure-works/proposed-works/Proposed-Shared-Path-Peats-Ferry-Road,-Hornsby The objective of this project is to provide an off-road shared user … END_OF_DOCUMENT_TOKEN_TO_BE_REPLACED