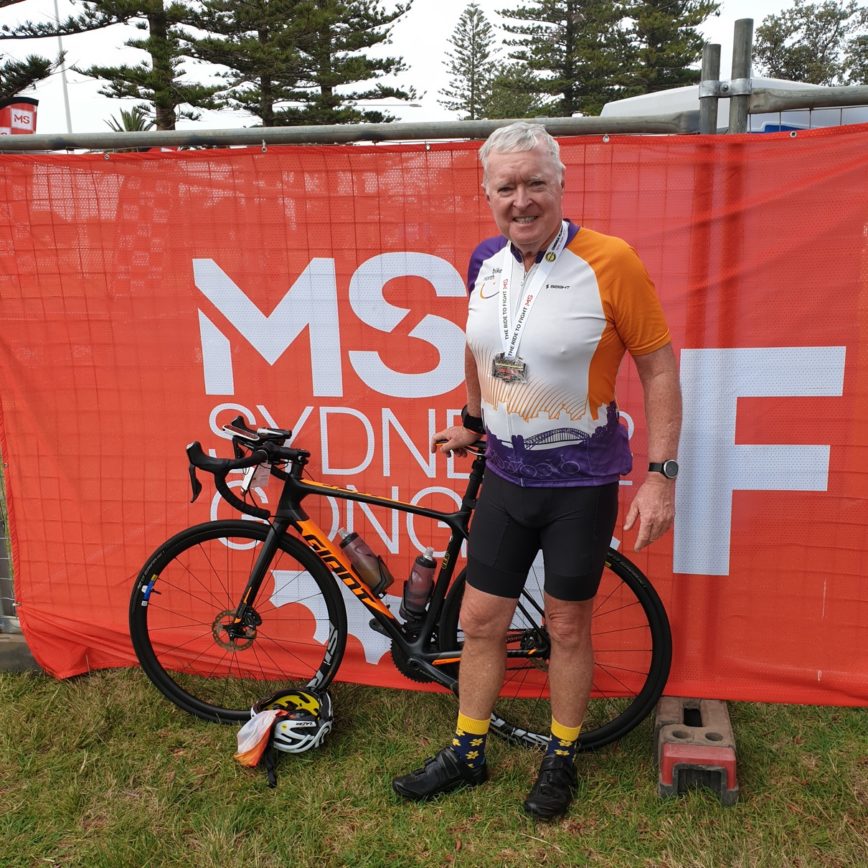 Some months back this question was put to Bike North members in an attempt to get a team together for last Sunday’s Gong Ride.

Yes the issues with the Gong Ride, and similar rides, were noted, such as:

· Too many idiots make it dangerous

Bike North had a small team of two, Terry O’Halloran and Brian Lynne, although a number of other Bike North members rode, wither without joining the Bike North Team or as part of other employer teams. Tom Ruben joined the team but had to withdraw due to family commitments interstate.

So how was it?

The weather on the day was perfect for the 10,000 riders. Both Terry and Brian drove to the start and parked within a short distance of Tempe Park. Arriving early they started in the first wave at 5:50am. Yes it was early but within around 1km, the ride was smooth and at your own pace. Traffic lights were a problem on occasions but often the Police waved riders through.

Starting early, it was not too crowded, although there were other bikes around. At some stages, there was not another rider within 100m. Brian in fact set a PB, one of many, on the Waterfall descent, even though he had done it 22 times before. The ride through the Royal National Park and along the coast, over the Seacliff Bridge was brilliant!

The John Whitton Bridge is not safe to pass following a fire on the bridge on 25 January 2021. This bridge is under the care and control of the Crown Lands Department and City of Canada Bay will work with them to reopen the bridge as soon as possible. While the bridge is closed pedestrians and cyclists will need to … END_OF_DOCUMENT_TOKEN_TO_BE_REPLACED

With Christmas and New Year’s festivities over, have you thought about what you want to do at Easter? Would you fancy a weekend of cycling? Cowra is about 5 hours’ drive west of Sydney. Hopefully we will be able to offer Bike North’s annual Easter cycle festival again in Cowra this year – from 2nd April to 5th April 2021, … END_OF_DOCUMENT_TOKEN_TO_BE_REPLACED

The Beaches Link as documented in the EIS on public exhibition offers nothing for cycling on the Lower North Shore and will result in severe impacts on the existing cycleways and local amenity both during construction and possibly in operation. Of greatest concern is the popular cycleway alongside Gore Hill Freeway in Artarmon which provides a safe separated regional connection … END_OF_DOCUMENT_TOKEN_TO_BE_REPLACED

The State Government has released the EIS for the Beaches Link and Gore Hill Freeway Connection for consultation until 1 March.   https://caportal.com.au/rms/bl  . This is a major road project which will have major impacts on the lower North Shore and the Northern Beaches area. This follows on from the EIS for the Western Harbour Tunnel and Warringah Freeway Upgrade … END_OF_DOCUMENT_TOKEN_TO_BE_REPLACED

The Beaches Link EIS is now on public exhibition at https://caportal.com.au/rms/bl  and virtual information session commence this week. The first Virtual Information Session (Artarmon) for the Beaches Link will be held on Thursday 14 January, 4-5pm. You can RSVP for this session at https://caportal.com.au/rms/bl?hview=modalConsultationSession . In Artarmon Bike North is extremely concerned at the impact on the popular cycleway alongside … END_OF_DOCUMENT_TOKEN_TO_BE_REPLACED