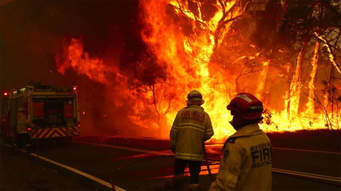 Amid all the ongoing catastrophe of the current bushfire season in Australia, it would be easy to conclude that cycling advocacy, in the scale of things, is not something that should be given such close attention for the time being. And yet the continual burning of fossil fuels around the world, among other things for our transport needs, is clearly a significant contributor to the phenomenon of long term atmospheric warming that we are living through – a warming process which is drying our landscapes, decreasing our rainfall and worsening our bushfire patterns.

We advocate for cycling infrastructure improvements not just because we know they make cycling safer and more enjoyable for us but because bicycle use as a means of transport can be a huge contributor to decreased car usage [and therefore fossil fuel burning] and bicycle usage will only increase if it becomes safer to cycle. With the advent of electric bicycles, topography is becoming less and less of an impediment to cycling for transport but safety will always be the primary concern of recreational and commuting cyclists.

Using a bicycle to get around is not some inner-city, weirdy/beardy, alternative lifestyle indulgence.

It is a healthy, efficient, effective, low cost, zero emission, transport mode freely available to the community right NOW. As our nation continues to burn this summer, surely the case for decreasing road expenditure in our cities in favour of increased public transport and cycling infrastructure spending has never been stronger. And yet Government recognition of this evidence in recent times seems to be not well reflected in the roll out of new cycling infrastructure in NSW. At the local level on Sydney’s northside, some Councils, like North Sydney and Ryde, are continuing to improve their cycleway networks, others not so much. Where I live, Hornsby Council’s two cycling related achievements in 2019 appear to be (1) a repair to a pot hole on the Somerville Rd descent to Crosslands and (2) a reduction in the speed limit to 50kph on The Esplanade, Thornleigh where there is a designated cycle lane shoulder. Any other improvements are still ‘in the planning stages’ – as they have been since at least 2014 !

We all need to do vastly better with bringing new cycleway construction to fruition. It’s one of the burning issues of our times.

Some ride leaders love thinking in maps, paths and routes. Sometimes this is to plan ride to new locations, new combinations of known routes or to enjoy events or activities where cycling is the most convenient way to access. With all that ride planning, the Bike North rides database just ticked over 500 different rides in the past month. A … END_OF_DOCUMENT_TOKEN_TO_BE_REPLACED

Get ready for the Biketober Business Challenge! In October 2020, organisations and riders will compete to see who can encourage most people to ride bikes for transport, health and fun!  Last year, 3,798 participants from 392 organisations took part in NSW, including 613 new riders. Altogether riding 932,900 kilometres, that’s more than 23 times around the world! Let’s see if … END_OF_DOCUMENT_TOKEN_TO_BE_REPLACED

Each year Bike North invites members to nominate other members of Bike North for recognition through our system of Volunteer Awards https://www.bikenorth.org.au/about-bike-north/bike-north-honours-system/.  As stated on the website we want to recognise – and  congratulate and thank – “people whose actions and commitment over a period of time are above and beyond what could be reasonably expected and who have made … END_OF_DOCUMENT_TOKEN_TO_BE_REPLACED

The third edition of the Rides Procedures and Policies and been produced and endorsed. The document covers the principles underpinning the whole rides program, and includes updates the rides committee or exec committee have operationalised in the past 4 years. It focuses on aspects that make up regular, diverse and safe rides program offered to members and the community, rather … END_OF_DOCUMENT_TOKEN_TO_BE_REPLACED

The Inaugural Spring Classics Weekend for 2020 will be in the Southern Highlands – with Bundanoon as the accommodation base and the starting point for the rides.  Explore Bundanoon and Southern Highlands by bike.  Rides will be at a gentle pace – with the whole point being to have a look around while we ride.  These will be led rides … END_OF_DOCUMENT_TOKEN_TO_BE_REPLACED