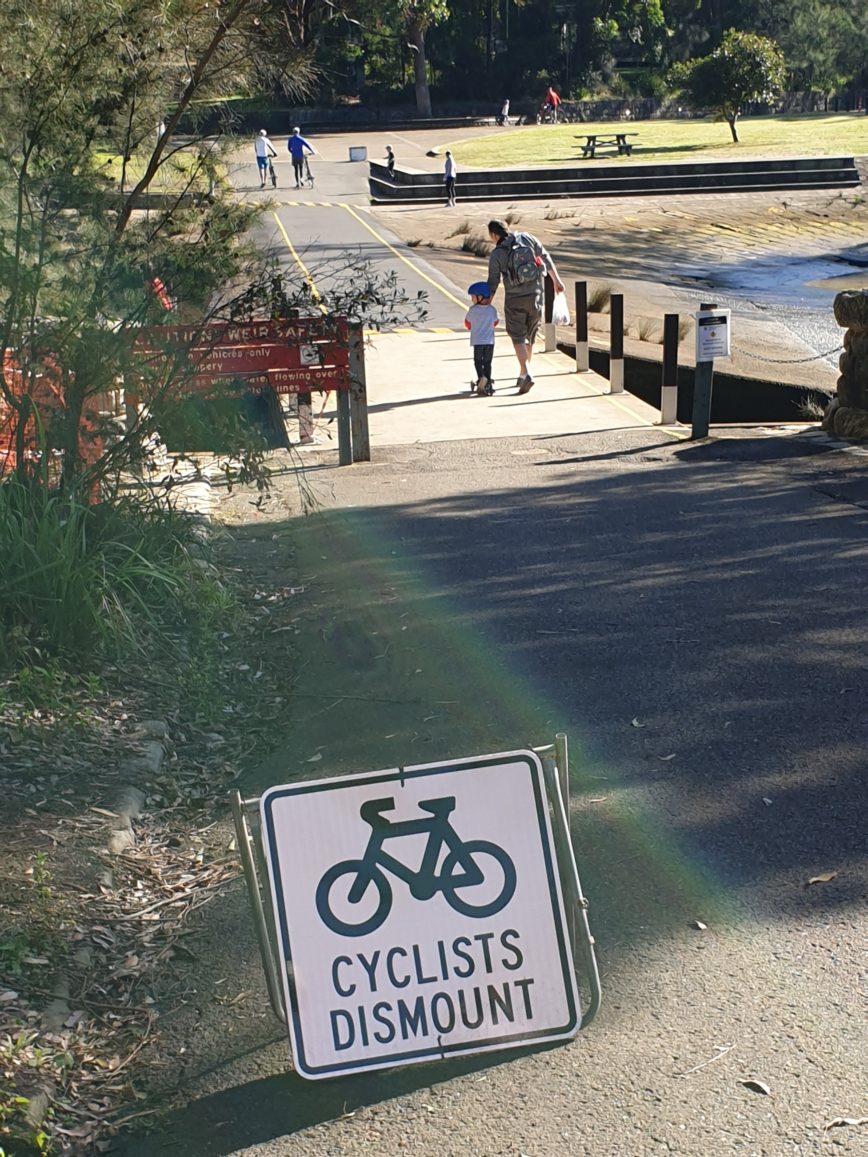 Some weeks ago, mention was made in Bike North News of changes to Depot Road, Lane Cove National Park, which links the Park to West Lindfield. The National Parks and Wildlife Service had constructed very large and dangerous speed bumps across the road in an attempt to slow cyclists down.

Since that time Bike North has continued to communicate with NPWS. The most recent response is as follows:

“NPWS have engaged an independent civil traffic safety consultant to undertake a road safety audit for Depot Road.  The safety audit is the formal examination of the existing or future road infrastructure with which road users interact.  The outcome of a road safety audit is a report, which identifies any road safety deficiencies and if appropriate, makes recommendations aimed at removing or reducing the deficiencies. In the review of constructed and designed traffic calming devices, there would be the tendency to be critical of the function, aesthetics, and form of the device. The purpose of Safety Auditing is not to rate the design, but to ensure that road safety is not compromised.”

Whilst changes have been made, Depot Road remains CLOSED, however it is noted both cyclists and pedestrians are continuing to use it.

Members should also note that signage has been placed at the causeway advising cyclists to dismount. Small speed bumps have been installed at each end of the causeway and Bike North is aware of one rider who fell and was injured during construction before the required yellow and black lines were put in place. This rider has reported the incident to NPWS.

Bike North will continue to liaise with NPWS, in a cooperative manner, to bring about a satisfactory solution to this matter.

The State Government has released the EIS for the Beaches Link and Gore Hill Freeway Connection for consultation until 1 March.   https://caportal.com.au/rms/bl  . This is a major road project which will have major impacts on the lower North Shore and the Northern Beaches area. This follows on from the EIS for the Western Harbour Tunnel and Warringah Freeway Upgrade … END_OF_DOCUMENT_TOKEN_TO_BE_REPLACED

The Beaches Link EIS is now on public exhibition at https://caportal.com.au/rms/bl  and virtual information session commence this week. The first Virtual Information Session (Artarmon) for the Beaches Link will be held on Thursday 14 January, 4-5pm. You can RSVP for this session at https://caportal.com.au/rms/bl?hview=modalConsultationSession . In Artarmon Bike North is extremely concerned at the impact on the popular cycleway alongside … END_OF_DOCUMENT_TOKEN_TO_BE_REPLACED

The Beaches Link EIS is now on public exhibition at https://caportal.com.au/rms/bl  and virtual information session commence this week. The Virtual Information Session (Cammeray) for the Beaches Link will be held on Thursday 14 January, 5-7:30pm. You can RSVP for this session at https://caportal.com.au/rms/bl?hview=modalConsultationSession . The major area of concern for bike riders in Cammeray is for bicycle paths and bicycle … END_OF_DOCUMENT_TOKEN_TO_BE_REPLACED

The Beaches Link EIS is now on public exhibition at https://caportal.com.au/rms/bl  and virtual information session commence this week. The Virtual Information Session (Northbridge / Willoughby) for the Beaches Link will be held on Tuesday 19 January, 4-5:30pm. You can RSVP for this session at https://caportal.com.au/rms/bl?hview=modalConsultationSession . The major area of concern for bike riders in Northbridge/Willoughby is for the bicycle … END_OF_DOCUMENT_TOKEN_TO_BE_REPLACED

IMPROVED CYCLING ACCESS TO HORNSBY CBD Hornsby Council has put on exhibition its plans for the construction of a Shared User Path (SUP) from Galston Road, Hookhams Corner to Hornsby TAFE/Jersey Lane Hornsby which Council hopes to commence in February 2021. More information is available at :- https://www.hornsby.nsw.gov.au/council/noticeboard/works/infrastructure-works/proposed-works/Proposed-Shared-Path-Peats-Ferry-Road,-Hornsby The objective of this project is to provide an off-road shared user … END_OF_DOCUMENT_TOKEN_TO_BE_REPLACED