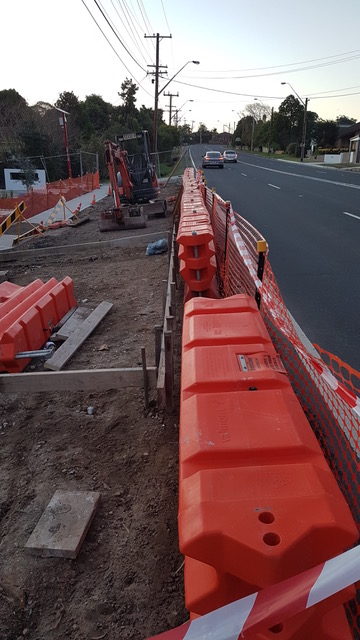 Is improvement coming at last to the old Pacific Highway’s shoulders north of Asquith ?

Bike North members and other regular cyclists are well acquainted with the risks of riding north or south along the old Pacific Highway cycle lane shoulders in the section of the Highway between Asquith and Brooklyn where they encounter dangerous fluctuations of shoulder widths, poorly cleaned/cleared surfaces and hazardous integrations and transitions across a number of busy intersections.

After several years of reporting such obstacles and hazards to the RMS, until recently there has been no discernable improvement in timely action after storms, with fallen trees blocking the shoulder for up to weeks and months at a time. Because of this cyclists are often at risk of having to choose between colliding with debris or riding, at short notice, in the active traffic lane in 80 k/h zones. But there may be light at the end of the tunnel…..

Bike North has lately pointed out to the RMS the road maintenance specification that RMS’ maintenance contractor, Downer, is supposed to be following in relation to these shoulders. It requires routine and storm event based inspections, with debris to be removed based on risk assessment at the time or warning signs put up and the debris moved asap. BN has arranged to meet with the RMS engineer who manages the Downer contract to discuss RMS’ lack of performance. Over the last few weeks you may have noticed the clearance of debris from the Pacific Highway shoulder north of Berowra including the fallen and cut coral tree approaching Cowan southbound, small cut trees approaching the old toll plaza northbound and overhanging wattle trees approaching the old toll plaza southbound.

Hopefully in the future debris and gravel banks will be removed in a more timely fashion before someone is injured or killed. An alarming example of the consequence of not undertaking this removal more expeditiously was the gravel bank that formed on a downhill corner on the Bobbin Head Rd eastbound after a January storm.  A cyclist skidded and fell on the gravel two days later early in the morning and slid across the road. Fortunately no traffic was approaching from the opposite direction. A cyclist died in similar circumstances on Bobbin Head east a few years ago. While it was commendable that sand was put on the oil spill on Bobbin Head Rd west recently, some signposting would have been appropriate because it was on the descending lane eastbound.

On another occasion this year a BN member witnessed a cyclist doing 50 k/h downhill on the Pacific Highway shoulder southbound approaching Mt Colah. The cyclist struck a rock the size of a half brick that was obscured by other riders. He went over the bars, slid head first down the concrete kerb, then rotated out into the path of following cyclists. Fortunately no one else was brought down by his ‘misfortune’ and the cyclist sustained only a fractured collar bone. Whether road maintenance would ever include sweeping at a frequency to remove such obstacles is debatable. So always ride with caution and don’t rely on RMS to protect you.

Apart from a possible improvement to the quality of highway shoulder hazard minimisation by the RMS :-

Lately, the Pacific Highway from the old Berowra toll plaza to Hornsby has never looked so clean. The true test will be next time there is a storm. And meanwhile, hope for the best but expect …. well ? … who knows ! ?

After being in hibernation for parts of March to May, the Bike North rides program under the Covid Safe protocols has hit a high mark of 56 rides in June. The second half of May has 28 rides and so far July has 28 rides. Typically for the past years the winter months average about 40 rides per month. There … END_OF_DOCUMENT_TOKEN_TO_BE_REPLACED

Bike North has always invested in safety through providing all ride leaders with especially designed first aid kits and providing them with first aid training.  Early this year the office of the Federal member for North Sydney drew our attention to the Commonwealth Government’s Volunteer Grants Scheme https://www.communitygrants.gov.au/grants/volunteer-grants-activity-2019-20 and supported our initial application for funding.  We have now been advised … END_OF_DOCUMENT_TOKEN_TO_BE_REPLACED

As members will know Bike North operates on a financial year basis with our Annual General Meeting scheduled for the third Sunday in August.  At this time of year your Executive is planning the AGM and preparing reports to members on the year just concluded. Given the COVID-19 restrictions (with a maximum of 20 people permitted at an outdoor gathering) … END_OF_DOCUMENT_TOKEN_TO_BE_REPLACED

For members who would like to take the train to the start of a ride, Opal fares will change from Monday 6 July 2020 including a temporary 50% discount for off-peak travel on metro/train, services between 10am and 3 pm. A new $8.05 all-day travel cap on Saturdays, Sundays and public holidays will be introduced. This will replace the current … END_OF_DOCUMENT_TOKEN_TO_BE_REPLACED

At any Bike North coffee stop, if anyone raises the question of tyres you will get ten different opinions from 5 different riders. The fact is that most modern tyres are very good quality and very few, if any of us, are riding hard enough to judge different rolling resistance and handling characteristics that impact on speed or safety of … END_OF_DOCUMENT_TOKEN_TO_BE_REPLACED