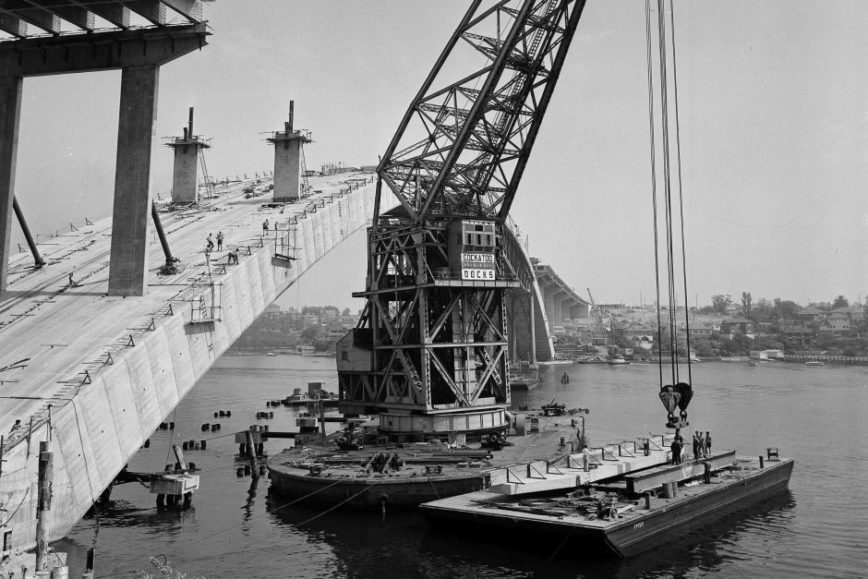 With Covid-19 inspiring more people to walk and cycle, it’s now time to make life easier for pedestrians, joggers and cyclists. And by coincidence, Hunters Hill Council has commissioned a consultant to recommend what can be done in this small part of Sydney. The consultant is preparing a new Bike Plan that will make it safer to children to cycle to school, for people of all ages to ride or walk for pleasure, for family groups to cycle through our back streets, for commuters to reach workplaces in Sydney or surrounding suburbs. More Active Transport will also relieve the traffic congestion around our many coffee shops. Council will be able to fund some of the local changes required, and can lobby Transport for NSW to fix our connections with neighbouring suburbs.

But they didn’t build a direct link between the two bridges; instead there is a narrow footpath that winds its way down to a flight of steps, through a scary tunnel under the slip lane then more steps down to Huntleys Point Road, from where there is a steep climb back up to Tarban Creek Bridge. Understandably, most cyclists and many pedestrians don’t follow this route, but instead brave the slip lane (in both directions)!

It’s not that the RTA didn’t realise there was a problem: in each of 2000, 2001 and 2002 they commissioned consultants to design options for a light pedestrian/cyclist overpass that would eliminate the steep descent/ascent. As recently as 2017 Transport for NSW wrote ‘While the design has been developed, there is currently no funding’. So we know that the solution is simple: just funding!

A similar problem exists should you wish to walk, jog or cycle between Hunters Hill and Lane Cove. To travel from the overpass, you’ll have to make the steep descent down Reiby Rd, followed by a steep climb back up to Figtree Bridge. Here the solution is simpler: a two-way shared path could be inserted beside the slip lane that brings cars from Figtree Bridge up to the overpass. That, too, was recommended to the RTA by another consultant in 2010, and also failed to secure funding.

We’ve been suffering these missing links for 55 years! Surely, with the growing awareness of a need to cater for people who chose to walk, jog or cycle, now is the time fund these simple lingering problems and help to make Sydney ‘a connected city’.

After being in hibernation for parts of March to May, the Bike North rides program under the Covid Safe protocols has hit a high mark of 56 rides in June. The second half of May has 28 rides and so far July has 28 rides. Typically for the past years the winter months average about 40 rides per month. There … END_OF_DOCUMENT_TOKEN_TO_BE_REPLACED

Bike North has always invested in safety through providing all ride leaders with especially designed first aid kits and providing them with first aid training.  Early this year the office of the Federal member for North Sydney drew our attention to the Commonwealth Government’s Volunteer Grants Scheme https://www.communitygrants.gov.au/grants/volunteer-grants-activity-2019-20 and supported our initial application for funding.  We have now been advised … END_OF_DOCUMENT_TOKEN_TO_BE_REPLACED

As members will know Bike North operates on a financial year basis with our Annual General Meeting scheduled for the third Sunday in August.  At this time of year your Executive is planning the AGM and preparing reports to members on the year just concluded. Given the COVID-19 restrictions (with a maximum of 20 people permitted at an outdoor gathering) … END_OF_DOCUMENT_TOKEN_TO_BE_REPLACED

For members who would like to take the train to the start of a ride, Opal fares will change from Monday 6 July 2020 including a temporary 50% discount for off-peak travel on metro/train, services between 10am and 3 pm. A new $8.05 all-day travel cap on Saturdays, Sundays and public holidays will be introduced. This will replace the current … END_OF_DOCUMENT_TOKEN_TO_BE_REPLACED

At any Bike North coffee stop, if anyone raises the question of tyres you will get ten different opinions from 5 different riders. The fact is that most modern tyres are very good quality and very few, if any of us, are riding hard enough to judge different rolling resistance and handling characteristics that impact on speed or safety of … END_OF_DOCUMENT_TOKEN_TO_BE_REPLACED