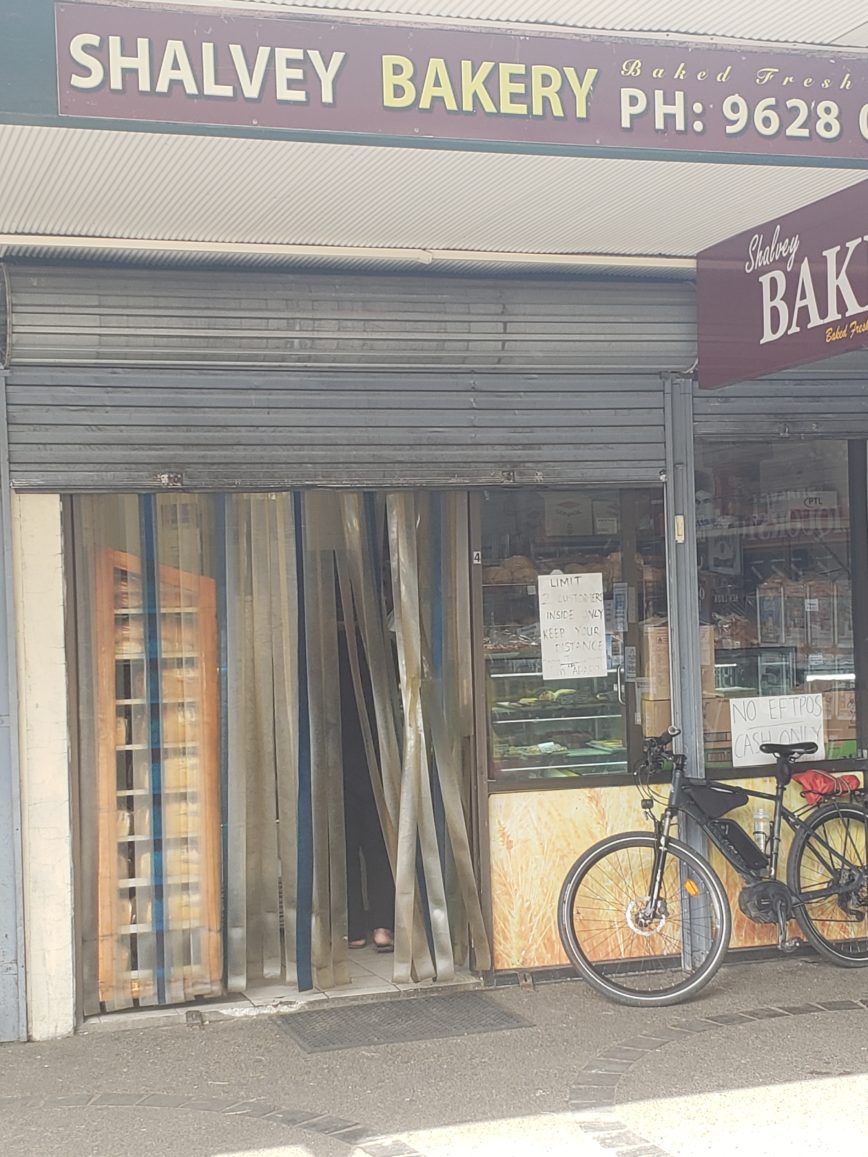 “Prudence” is the full name of my e-bike, better known as Pru. Prudence is a Peugeot (the car company), and prudence led this old man to nurse the bod and buy an e-bike 4 years ago.

On Monday (05.04.21), I rode an oft-enjoyed route, Katoomba to Meadowbank, accompanied by Alan Brien. After Penrith, my route passes through/near Cambridge Park, North St Marys, Ropes Crossing, Shalvey, and Bidwell, joining the M7 SUP at its “corner” in Dean Park.

Eateries are very scarce after Penrith, but a highlight is to divert north off the M7 to lunch at Stonecutters Ridge Golf Club. Alas, we were hungry well before there, and stopped at the tiny bakery in Shalvey, propping our bikes against the display window. We stepped thru the adjacent doorway and one metre inside to the counter.

Some half-dozen teenagers were sitting opposite the bakery, some 15M away, and I almost joked that one of us should remain with the bikes. After my prompt purchase I stepped outside to find … only Alan’s bike! Shafted in Shalvey!

A woman approaching the bakery deduced what had happened and pointed to a scooter-riding accomplice, heading around a bend some 100M away. The (remaining) teenagers opposite the bakery stared quite inscrutably, and Alan warned that they would surely apply the code of silence if approached.

I HAD removed my phone from the handlebars, and phoned the police, arranging where to meet them. The officer asked twice whether I’d seen the offenders, and seemed unimpressed that the nearby teenagers would certainly have seen them.

Then I couldn’t see Alan, until I noticed him with the teenagers. He warned them that the bike was registered and any attempt to sell it would be detected. He offered them a reward for Pru’s return, no questions asked. They’d think about that!

Within seconds of Alan debriefing me, three of the teenagers jogged past us in the direction Pru had gone. Five minutes later, we saw them approaching from afar, wheeling Pru. Alan and I pooled our cash and gave them $75. Pru was missing its full, large saddle-bag, a hard-to-replace bag strapped on the back, and various equipment (including bike-lock!), but the “good” boys couldn’t help. They DID insist on shaking hands with Alan and myself – budding businessmen?

After awaiting the police awhile, I phoned them, explained the outcome, and agreed that I’d report to my local police after returning home.

I’m still staggered by the brazenness. The bikes were parked 2 to 4 metres from us, with saddles and handlebars quite visible if we looked sideways, or the shopkeeper looked beyond us. We were together in the bakery for about one minute!

BEWARE! Prudence required, no matter how close the bike, how brief your diversion! And take a streetwise ride buddy, and cash!!

Posted: February 1, 2023
Here are two strategic cycleways for which Transport for NSW is seeking feedback.  Both will complete links between existing cycleways or soon to be constructed cycleways.  As always they need support, as do cycleways in general with an upcoming state … END_OF_DOCUMENT_TOKEN_TO_BE_REPLACED

Posted: February 1, 2023
Registration for the Easter weekend is now open. If you are coming then you MUST register to ride in the Tour de Cowra.  Registration Fees:  Members: $10 Non-members: $45 Note: Non-members please note that if you wish, before you register, … END_OF_DOCUMENT_TOKEN_TO_BE_REPLACED

Posted: February 1, 2023
Kerry Tipton led four other Bike Northers from Castle Hill to Milsons Point by following the winding creeks that lead to Parramatta River – the Parramatta Rivers Run. On the way they rode through Parramatta Park to find Australia Day … END_OF_DOCUMENT_TOKEN_TO_BE_REPLACED

Posted: February 1, 2023
Do you know that membership with Bike North entitles you to a 15% discount on your membership with Bicycle NSW?  Use code bikenorth2122 when you join or renew.  Bicycle NSW members receive global, comprehensive (personal accident and public liability) rider … END_OF_DOCUMENT_TOKEN_TO_BE_REPLACED

Posted: January 25, 2023
The state election will be held on 25 March.  The state government has a big impact on cycling, from road rules to providing most of the funding for infrastructure.    Bike North will again be engaging with candidates, seeking their support and … END_OF_DOCUMENT_TOKEN_TO_BE_REPLACED