In February, I made my 5th annual NZ visit since a brother “migrated” to Tauranga. Each trip involves Tauranga plus some other areas – and plenty of cycling. This trip was confined to the north half of the North Island.

All riding was on my brother’s e-MTB, “Ava”: hard-tail, tyres wide and well-treaded but not nobbly. Early, I rode two of the 22 “Great” Trails: “Twin Coast” (all) and “Hauraki Rail” (most). The 23km east-west spur of the Hauraki, between Waihi and Paeroa, is far more scenic than the rest of it: I ride it whenever in the area. It includes a 1km dimly-lit tunnel.

In Tauranga, there are two main midweek ride groups (Tues and Wens). Both are growing (50 riders?), and split into several sub-groups before starting, based on pace and difficulty. All ride MTBs, and the % of e-bikes has grown past 50%. Given that MTB trails often involve low-speed turns and dips, e-bikes make good sense. (There are “e” divisions of some MTB races nowadays).

These midweek rides typically take two hours, with coffee always afterwards. Much of the riding is on packed gravel, on a GROWING network of trails. Tauranga has extensive wetlands, and I guesstimate some 15km of wooden boardwalk!

Compared to Bike North, calls and signals in these groups are very slack. A couple of locals who have also ridden in road groups shared my concern. And they don’t deploy human signposts, necessitating regroups at junctions, or losses!

Some of the Wednesday group also trip out-of-town two Fridays a week, with bikes on/in cars. This gives me an additional guided adventure each trip.

Tauranga is in the “Bay of Plenty” Region, where February is “Bicycle Month”: like NSW Bicycle Week on steroids. There are numerous special led rides on weekends and after work.

My final few days this trip were based at Hamilton (pop. 200,000), some 90 minutes drive west of Tauranga. I re-rode solo north alongside the Waikato River (NZ’s longest) on a sealed path (unusual), then drove SW and re-rode the northern part of “Waikato Trails”, another of the 22 Great Trails.

At Arapuni, on this latter mission, I met several riders who were one week into this year’s 3,000 “Tour Aotearoa”: NZ top to bottom, unsupported in 30 days. One pair of NZ guys astonished me with their miniscule luggage. They politely stayed downwind and distant! Former BNer Amy Kwong completed the tour two(?) years back. Any others done or intending?

Generally, only foreign cyclists lug much luggage in NZ. Locals know the trail surfaces and terrain warrant weight-minimizing and manoeuvrability. There is a cottage industry to transport riders, bikes and luggage between trail-heads.

Rather than some great scenic photos, I’m including food-for-thought photos from each of my near-Hamilton rides.

Posted: February 1, 2023
Here are two strategic cycleways for which Transport for NSW is seeking feedback.  Both will complete links between existing cycleways or soon to be constructed cycleways.  As always they need support, as do cycleways in general with an upcoming state … END_OF_DOCUMENT_TOKEN_TO_BE_REPLACED

Posted: February 1, 2023
Registration for the Easter weekend is now open. If you are coming then you MUST register to ride in the Tour de Cowra.  Registration Fees:  Members: $10 Non-members: $45 Note: Non-members please note that if you wish, before you register, … END_OF_DOCUMENT_TOKEN_TO_BE_REPLACED

Posted: February 1, 2023
Kerry Tipton led four other Bike Northers from Castle Hill to Milsons Point by following the winding creeks that lead to Parramatta River – the Parramatta Rivers Run. On the way they rode through Parramatta Park to find Australia Day … END_OF_DOCUMENT_TOKEN_TO_BE_REPLACED

Posted: February 1, 2023
Do you know that membership with Bike North entitles you to a 15% discount on your membership with Bicycle NSW?  Use code bikenorth2122 when you join or renew.  Bicycle NSW members receive global, comprehensive (personal accident and public liability) rider … END_OF_DOCUMENT_TOKEN_TO_BE_REPLACED

Posted: January 25, 2023
The state election will be held on 25 March.  The state government has a big impact on cycling, from road rules to providing most of the funding for infrastructure.    Bike North will again be engaging with candidates, seeking their support and … END_OF_DOCUMENT_TOKEN_TO_BE_REPLACED 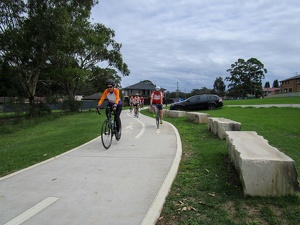