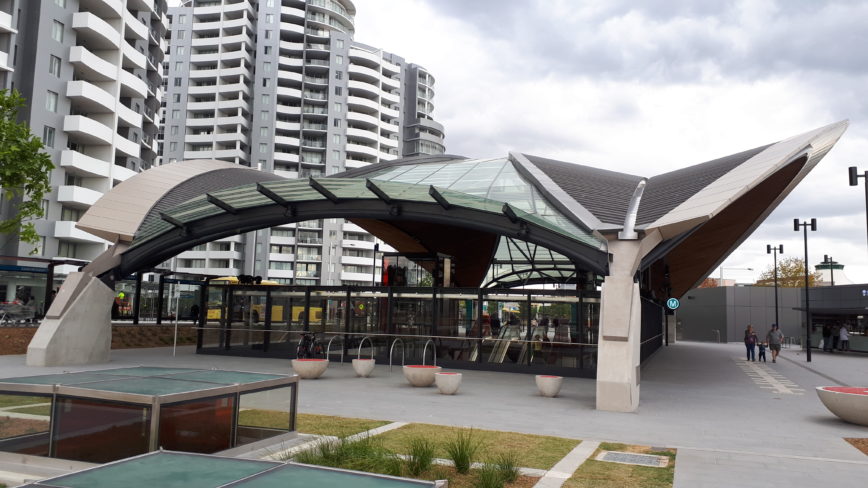 Bike North was involved from the very start of the new Metro. Thanks to the work put in by Doug Stewart, Justin Holmwood and Phil Griffith, cyclists have been considered in the design from day one and it shows at all the new stations.

Whilst the Norwest Metro could only design and build in the station precincts, in cooperation with The Hills Council, bike paths have been developed which allow cyclists to ride the length of the elevated section and so provide easy access to stations. There are still issues accessing Cherrybrook, Castle Hill and Norwest, due to the lack of suitable bike paths but Bike North is continuing to advocate for these paths to be developed. In our survey, we rode from Tallawong to Bella Vista Stations without leaving a bike path.

Once at the stations, cyclists can take their bikes on the train, lock them in bike storage racks or against “D” stands which are all under cover. Details on the bike sheds are available at bikelockers.com.au. Storage is free and access is via your Opal Card once you have linked it, but when Bike North visited all the bike sheds on Monday 27th May, the card access had not been set up and the sheds were open. Sheds and “D” stands are all well located, possibly with the exception of The Hills Showground Station where the storage shed is across a side street.

There are lifts at every station and they are deep enough to take bikes!

The Metro is a major piece of infrastructure for Sydney and hopefully the bike facilities will encourage more people to commute to the station by bike.

The John Whitton Bridge is not safe to pass following a fire on the bridge on 25 January 2021. This bridge is under the care and control of the Crown Lands Department and City of Canada Bay will work with them to reopen the bridge as soon as possible. While the bridge is closed pedestrians and cyclists will need to … END_OF_DOCUMENT_TOKEN_TO_BE_REPLACED

With Christmas and New Year’s festivities over, have you thought about what you want to do at Easter? Would you fancy a weekend of cycling? Cowra is about 5 hours’ drive west of Sydney. Hopefully we will be able to offer Bike North’s annual Easter cycle festival again in Cowra this year – from 2nd April to 5th April 2021, … END_OF_DOCUMENT_TOKEN_TO_BE_REPLACED

The Beaches Link as documented in the EIS on public exhibition offers nothing for cycling on the Lower North Shore and will result in severe impacts on the existing cycleways and local amenity both during construction and possibly in operation. Of greatest concern is the popular cycleway alongside Gore Hill Freeway in Artarmon which provides a safe separated regional connection … END_OF_DOCUMENT_TOKEN_TO_BE_REPLACED

The State Government has released the EIS for the Beaches Link and Gore Hill Freeway Connection for consultation until 1 March.   https://caportal.com.au/rms/bl  . This is a major road project which will have major impacts on the lower North Shore and the Northern Beaches area. This follows on from the EIS for the Western Harbour Tunnel and Warringah Freeway Upgrade … END_OF_DOCUMENT_TOKEN_TO_BE_REPLACED

The Beaches Link EIS is now on public exhibition at https://caportal.com.au/rms/bl  and virtual information session commence this week. The first Virtual Information Session (Artarmon) for the Beaches Link will be held on Thursday 14 January, 4-5pm. You can RSVP for this session at https://caportal.com.au/rms/bl?hview=modalConsultationSession . In Artarmon Bike North is extremely concerned at the impact on the popular cycleway alongside … END_OF_DOCUMENT_TOKEN_TO_BE_REPLACED