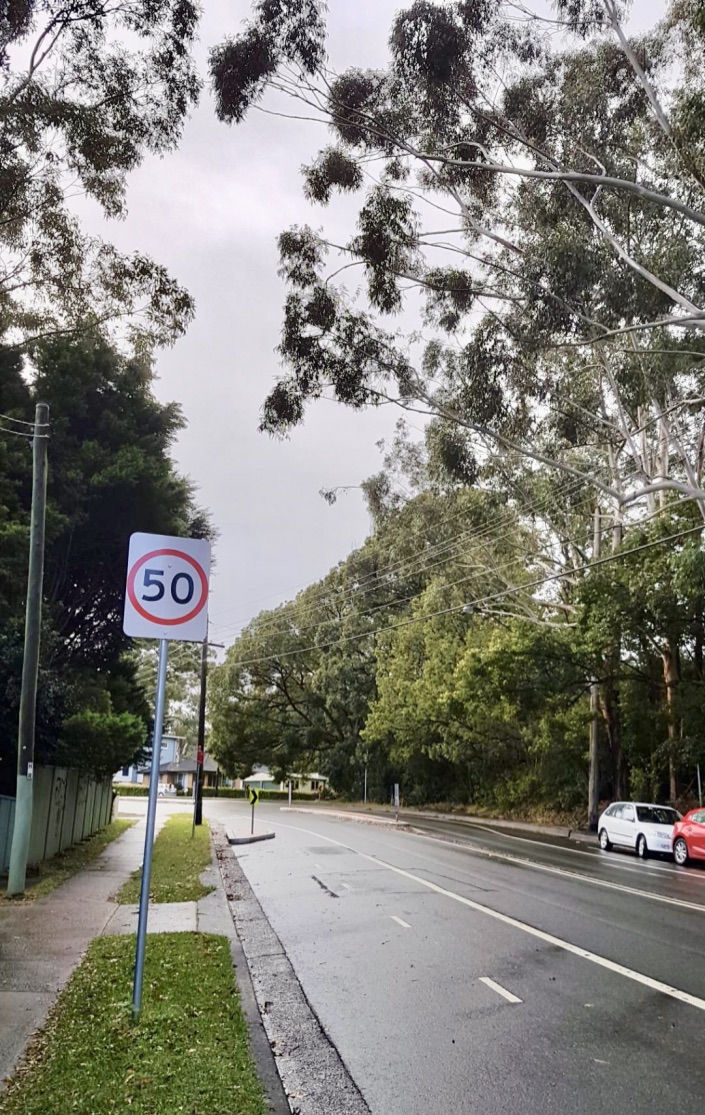 In recent years Bike North’s Hornsby advocacy working group has been pressuring Council and the RMS to implement measures to make the cycle lane in The Esplanade, Thornleigh, from Duffy Avenue to Thornleigh Station, less threatening to users. In particular, the Hornsby Working Group has argued for a reduction in the speed limit applicable on that stretch of road from 60 kph down  to 50 kph. Cyclists have long felt intimidated by The Esplanade’s fast moving traffic which, on its bends, routinely encroaches into the cycle lanes on either side of the road. Council’s view, on the other hand, has been that The Esplanade is a key sub-arterial road in Hornsby Council’s Road Hierarchy Plan and, as such, has insisted that the Esplanade’s posted speed limit of 60 kmh was consistent with other such roads in the Shire. Council has further argued that :-

“A minority of drivers have a disregard for traffic regulations, including speed limits and keeping clear of cyclists. This is a driver behaviour issue that can only be addressed through enforcement by NSW Police “ .

Finally it seems someone in either the Council or the RMS or both has seen sense and the speed limit on The Esplanade, in the area of greatest concern for cyclists, has recently been reduced to 50 kph. Bike North welcomes this development and thanks those involved in the decision to lower the speed limit.

The John Whitton Bridge is not safe to pass following a fire on the bridge on 25 January 2021. This bridge is under the care and control of the Crown Lands Department and City of Canada Bay will work with them to reopen the bridge as soon as possible. While the bridge is closed pedestrians and cyclists will need to … END_OF_DOCUMENT_TOKEN_TO_BE_REPLACED

With Christmas and New Year’s festivities over, have you thought about what you want to do at Easter? Would you fancy a weekend of cycling? Cowra is about 5 hours’ drive west of Sydney. Hopefully we will be able to offer Bike North’s annual Easter cycle festival again in Cowra this year – from 2nd April to 5th April 2021, … END_OF_DOCUMENT_TOKEN_TO_BE_REPLACED

The Beaches Link as documented in the EIS on public exhibition offers nothing for cycling on the Lower North Shore and will result in severe impacts on the existing cycleways and local amenity both during construction and possibly in operation. Of greatest concern is the popular cycleway alongside Gore Hill Freeway in Artarmon which provides a safe separated regional connection … END_OF_DOCUMENT_TOKEN_TO_BE_REPLACED

The State Government has released the EIS for the Beaches Link and Gore Hill Freeway Connection for consultation until 1 March.   https://caportal.com.au/rms/bl  . This is a major road project which will have major impacts on the lower North Shore and the Northern Beaches area. This follows on from the EIS for the Western Harbour Tunnel and Warringah Freeway Upgrade … END_OF_DOCUMENT_TOKEN_TO_BE_REPLACED

The Beaches Link EIS is now on public exhibition at https://caportal.com.au/rms/bl  and virtual information session commence this week. The first Virtual Information Session (Artarmon) for the Beaches Link will be held on Thursday 14 January, 4-5pm. You can RSVP for this session at https://caportal.com.au/rms/bl?hview=modalConsultationSession . In Artarmon Bike North is extremely concerned at the impact on the popular cycleway alongside … END_OF_DOCUMENT_TOKEN_TO_BE_REPLACED