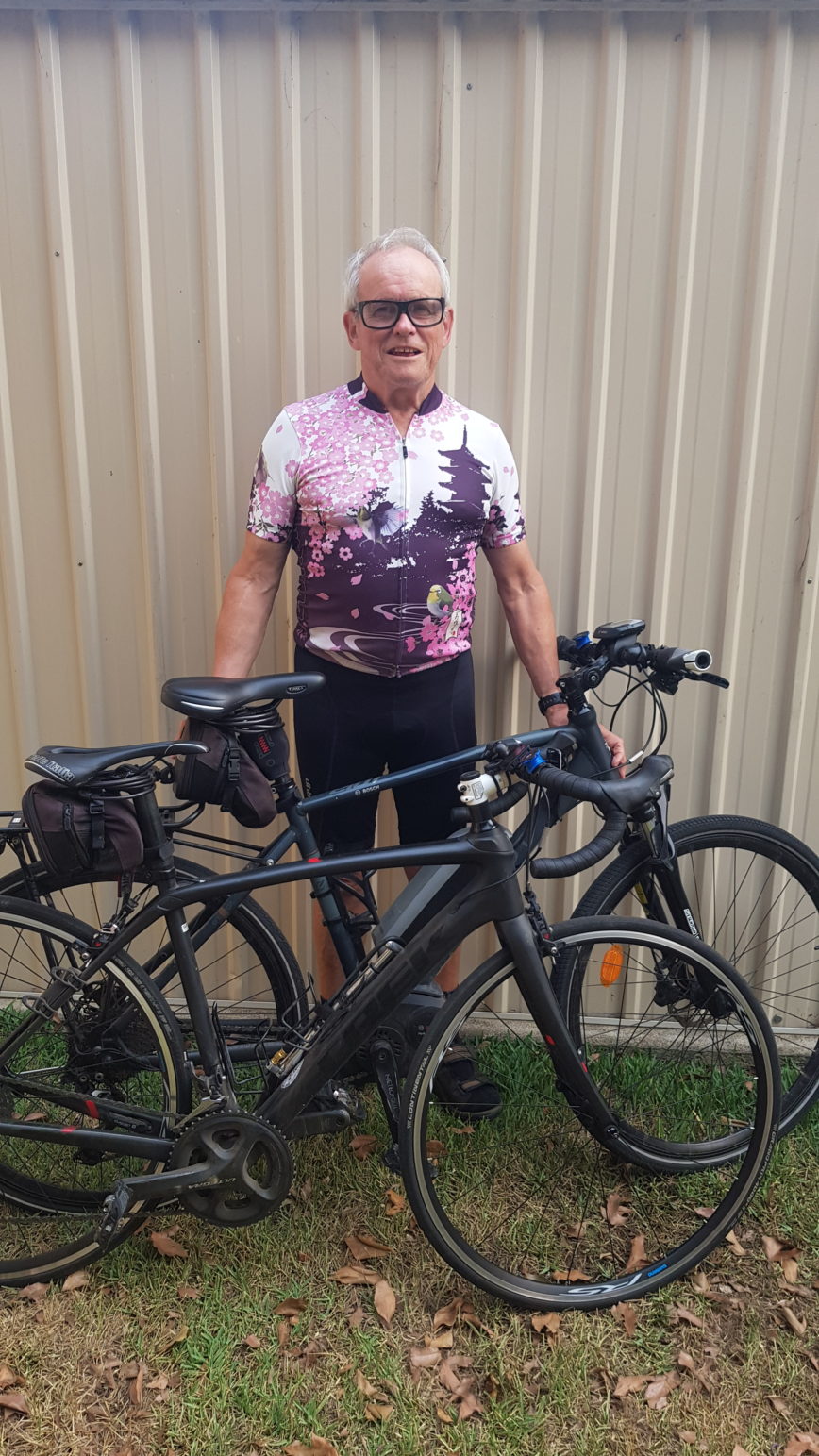 In late 2009, aged 62 and retired, I was cycling more and enjoying it more.   Freedom, breeze-on-the-body, scenery.  Most riding was day-tripping from my home on Sydney’s lower North Shore.  I wanted to COMFORTABLY ride all day, on successive days, on trips away.  I decided to ride more, consistently, so I could ride more, comfortably!

I enjoyed that year’s “project” immensely, and decided to extend a year, then another,  … , until completing a whole decade.  I had six “failure “months in the 120 months, with five failures occurring in the first three years and the last in the fifth year.  Failures were for illness, injury, or weeks-on-high-seas, not for waned enthusiasm.  Failures were made up next month.

I now wonder whether quota goals might be better variable per season, especially for workers, and/or where winter or summer temperatures are extreme.

I rarely cycled from age 5 to 50, perhaps because I lived in hilly terrain and the less hilly roads were busy.  I cycled a few km to work intermittently in my 50s.  A chance meeting led me into “Muggaccinos” a northern Sydney cycling group.  At the time, Muggaccinos cycled 100+km each Sunday, with a repertoire of some 40 routes beyond Sydney’s fringe.  100km boggled my mind initially, but I was fit from running for decades, and worked up to that distance.  Eventually, I enjoyed riding most of the day each Sunday, with two or three major refreshment stops.

These Muggs rides schooled me in the ”Zen” of  flowing on country roads, coping with traffic thereon, and built my aversion to traffic lights and other flow inhibitors.

Critical to maintaining enthusiasm has been route variety.  I avoid riding the same/similar route within a fortnight.   Less attractive routes are ridden less often.  I use ferries (1km from home) sometimes to reach nicer cycling routes, and use trains (1km from home) extensively.  The $2.50 cap/day on NSW Seniors’ public-transport use encourages me to roam far and wide, often commuting multiple hours in one day to access pleasant routes.  (I pass the commute time reading, if alone).

There were never “training” rides, and no stationary bike, nor gym.  Every ride HAD to be a pleasant adventure on its own merit.  I avoided riding in temperatures below 10 or over 30.  Avoided headwinds and rain, wherever possible.  I became more focussed on remaining flexible re when to ride, and where.  I ceased riding major events in 2013, partly re safety, but also reluctance to commit to date and route before knowing forecast weather.

Speaking of enjoyable, I must confess my “cheating”!

e-Bike.  Some 17,000km was on e-bikes, mainly on “Pru”, bought after I turned 70.  In Australia, it seemed riders bought e-bikes after 80, when their cycling “world” had already shrunk.  I wanted to maintain my momentum, and that’s happened.  I’ve found many excuses for riding Pru, while still sometimes pedal-powering “normal” bikes.  There have been many times when I would not have ridden at all if no Pru, such as recovering from illness/injury, fatigued, air-pollution.  The excuse list grows!

Downhill.  I sometimes use a train for altitude, so I can cruise downhill.  The most common example from home is a train to Leura, some 100km west of Sydney and altitude 1,00M.  Another near-Sydney example is Mittagong (alt. 635M).  In Europe, I’ve often used trains for altitude in alpine areas.  My extensive surveys confirm that those riding downhill look happier than those battling uphill!

DownWIND.  I like to decide my ride-route only when confident of wind direction, and let a train do the upwind work.  Happiness is riding Pru down from Leura in a strong westerly: triple-cheating!

Once I clarified why I cycled, such “cheating” came guilt-free!

Nowadays, about half my riding is solo.  This might be anathema to many, and I don’t recommend it for lonely bush tracks, especially if late in the day and/or out of phone range.  It helps to be self-sufficient, especially re punctures and navigation.  And my worst-case scenario is to lock the broken bike aside the road and hitchhike to public transport.  (Even worse is injury: I’d hope for a good samaritan soon driving by).

Solo cycling has several advantages.  At every moment, you can ride at the speed that suits yourself.  Or stop wherever, whenever, “duration-ever”.  This is good for photography tragics like me.

Until September 2016, my cycle “touring” was “hub-and-spoke”: stay in the one place and day-ride in various directions.  But to ride extensively aside the Danube, I finally bought an appropriate bike and panniers.  Since then, that has been how I’ve toured in Europe, and a bit in Australia.  A mixture of the two modes suits me best, as many successive days of changed accom giddies me.  Also, I avoid significant climbing with panniers (see “Cheating”).

For the last six years, I’ve organized Autumn and Spring riding in NSW Hunter region with a small group.  This usually comprises four 100km day-rides from a Maitland base, often with train-assistance to/from ride-route.  We sometimes reduce a ride due to weather, and drive to Port Stephens for near-sea riding if heatwave.  I have created over 30 Hunter routes that start and end at railway stations, including the Hunter rail-car network.  And we DO sometimes change planned ride route, to head downwind!

At home, my mountain-bike gathers dust.  But each year in NZ (these days), I ride a mountain-bike extensively.  The NZ trail network is great in expanse, condition, and scenery.  Mountain-biking is much slower than road-riding, particularly on “technical” trails.  For a quota system involving much mountain-biking, I think “saddle-hours” per month/season would be better than km.

This has been a great decade for tech help.  For a start, carbon bikes have made climbing easier and bumps softer.  And, did I mention e-bikes?!  Computer tools like ridewithgps.com (“RwGPS”) have made route-planning and cue-sheets easy.

Improving smart-phones, with bigger, better screens, evolving apps and wider/cheaper coverage, have been a godsend, especially coupled with handlebar mounting (I use “Quadlock”).  After plotting an intended route on my computer, I have immediate access to it on my phone, with verbal cues.  RwGPS now enables route-plotting and maintenance on the phone.  And there’s the vast improvement in phone photographics.  So, the phone is the only device I need when touring.

Falls, I had a few!  But they were low-speed, mainly on sharp wet turns.  My worst was helmet-first after becoming airborne when stamping my pedal on an unseen bitumen “wave” after cornering.  I awoke later in hospital!  Some who know my downhill-dashing and my traffic-tangling will be puzzled at no broken bones.  A lot of luck has been involved, but I suggest that so much cycling has elevated my bike-handling, traffic-handling, and conditions-handling.

Admittedly, this has been a self-indulgent project.  But I HAVE hopefully contributed to others’ cycling pleasure by leading hundreds of rides.  This has been in several formal “BUGs”, plus many, many “mates rides”.  Also, I have plotted many hundred ride routes, publicly available in RwGPS.

I intend to promptly halve my riding.  That’s still a lot by some standards, but even halving will probably cause withdrawal angst!  I intend to do more exploring in eastern Oz, while continuing my annual NZ and Europe venturing.

I need to face a decade’s worth of house-tidying, house-maintenance, body maintenance(!), relationship-maintenance(!), … But I also plan to diversify my outdoor hobbies, sailing more, paddling, walking.  And I should tidy-up and re-ride my RwGPS routes, to be more trustworthy for others.

To the many who have helped me along the way, provided great company, or tolerated my cycling priority: THANK YOU!

Use a large saddle-bag.  Fill it with TWO tubes, repair-kit, & many useful items.

Use a rear-view mirror.  Uncool, but very helpful if used often.  I use Rearviz.

Always carry a lock.  Bike or body might have a major problem.

Use a navigation tool.  On handlebars.  Use always, to build/maintain skill

Use a weather app.

Eat and hydrate.  Early and often.

Always hand-signal.  Habit makes it instinctive.  Do NOT signal if hands-on nec.

Cooperate with drivers delayed behind.  Try to help them pass ASAP, pre rage!

Do maintenance courses.  Repeatedly!  There’s always something to learn.

Ponder others’ accidents.  To help refine your defensive techniques.

Save for early retirement!  For cycling fun, fun, fun while body willing & able!

Cycling NSW have released the dates of their coaching courses. The Community Cycling Coaching Course is on Sat 7th & Sun 8th March. This is aimed at learning approaches to improving cycling skills at the community and local bike group level. The 2020 list of dates and types of CNSW coaching education courses is at https://cycling.org.au/nsw/coach/cycling-nsw-coaching-courses You can read the … END_OF_DOCUMENT_TOKEN_TO_BE_REPLACED

Roll up to help make this a great weekend! Bring family, friends and neighbours. SAVE THE DATE Help celebrate the opening of the first pilot rail trail on a long-out of service, publicly owned, rural rail corridor. The success of the Tumbarumba to Rosewood rail trail will influence the development of the next 2 pilot rail trails in NSW. If you can’t be … END_OF_DOCUMENT_TOKEN_TO_BE_REPLACED

Cover your bike in the case of an accident, theft or other events at home (fire, flood). Use code BNSWBike2019 for a 10% discount. Please note: you will need to create a new account on the bike insurance website as it’s different from the Bicycle NSW website. Attached is a general flyer for you to share with family and friends … END_OF_DOCUMENT_TOKEN_TO_BE_REPLACED

Cycling skills a focus for Bike North and Ryde Council

2019 was the 3rd year the Gravel Grit NSW event was run by the Victoria-based Bicycle Network organisation. It is a course that goes through Watagan and Olney State Forests beginning from Laguna on Old Northern Road. I did put it down on my calendar for the past 2 years but some how family commitments and travel consistently derailed my … END_OF_DOCUMENT_TOKEN_TO_BE_REPLACED