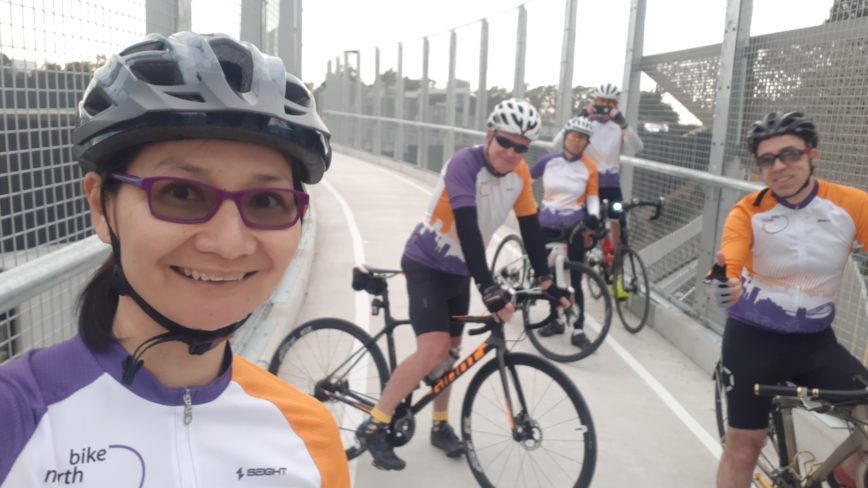 It’s not every day that you get to use new cycling infrastructure, even before it’s opened, but that’s what five Bike North members were able to do last Friday, 4th September.

Ever since the NorthConnex tunnel was announced, a number of Bike North members, including Life Member, Doug Stewart, have been liaising with the construction company and councils  to bring about infrastructure that could allow cyclists to safety and efficiently move through this major interchange. That’s not easy, given the various entry, exit and M2 through lanes involved. Bike North is confident that members, and cyclists in general who use the M2, will be very impressed by the end result.

Last Friday, Darryn Capes-Davis, Linda Gock, Terry O’Halloran, Carol Lee (with her pride and joy, Chloe) and I suited up in Bike North jerseys and assisted Transurban to shoot a video aimed at educating cyclists on accessing, and using, the new overhead bridge, west bound, plus the cantilevered cycleway and culvert, east bound. It was a bit of fun, riding up and down for the camera but it also allowed us to preview the result of cooperative involvement.

We are still awaiting an opening date, which can’t be too far in the future. In the meantime, you’ll just have to be patient and I’ll have to enjoy my first Strava KOM until others can use this important addition to Sydney’s cycling infrastructure.

Some ride leaders love thinking in maps, paths and routes. Sometimes this is to plan ride to new locations, new combinations of known routes or to enjoy events or activities where cycling is the most convenient way to access. With all that ride planning, the Bike North rides database just ticked over 500 different rides in the past month. A … END_OF_DOCUMENT_TOKEN_TO_BE_REPLACED

Get ready for the Biketober Business Challenge! In October 2020, organisations and riders will compete to see who can encourage most people to ride bikes for transport, health and fun!  Last year, 3,798 participants from 392 organisations took part in NSW, including 613 new riders. Altogether riding 932,900 kilometres, that’s more than 23 times around the world! Let’s see if … END_OF_DOCUMENT_TOKEN_TO_BE_REPLACED

Each year Bike North invites members to nominate other members of Bike North for recognition through our system of Volunteer Awards https://www.bikenorth.org.au/about-bike-north/bike-north-honours-system/.  As stated on the website we want to recognise – and  congratulate and thank – “people whose actions and commitment over a period of time are above and beyond what could be reasonably expected and who have made … END_OF_DOCUMENT_TOKEN_TO_BE_REPLACED

The third edition of the Rides Procedures and Policies and been produced and endorsed. The document covers the principles underpinning the whole rides program, and includes updates the rides committee or exec committee have operationalised in the past 4 years. It focuses on aspects that make up regular, diverse and safe rides program offered to members and the community, rather … END_OF_DOCUMENT_TOKEN_TO_BE_REPLACED

The Inaugural Spring Classics Weekend for 2020 will be in the Southern Highlands – with Bundanoon as the accommodation base and the starting point for the rides.  Explore Bundanoon and Southern Highlands by bike.  Rides will be at a gentle pace – with the whole point being to have a look around while we ride.  These will be led rides … END_OF_DOCUMENT_TOKEN_TO_BE_REPLACED