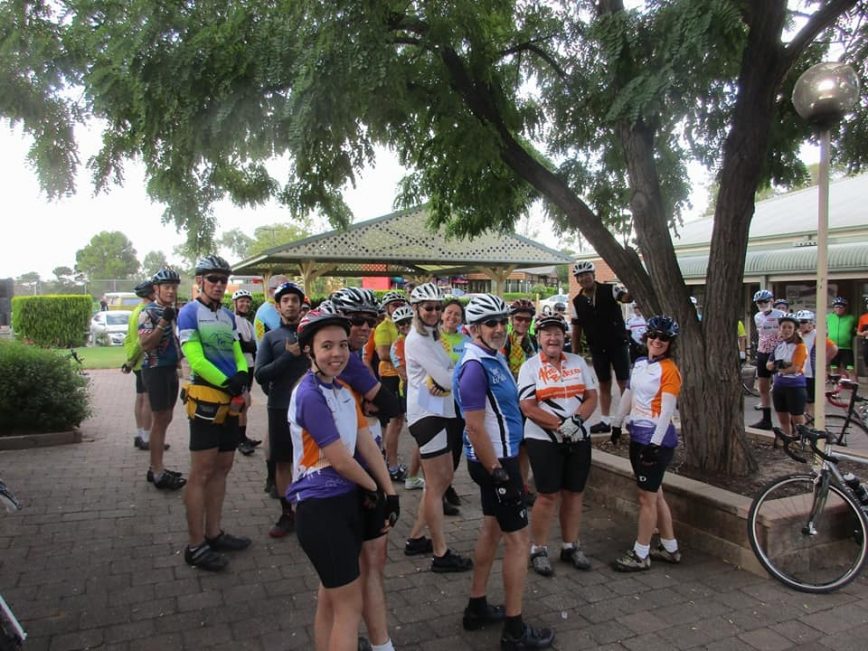 here are several special events which Bike North holds in most years. Some are limited to members only, others are open to all comers. New events may be added in future and others discontinued. The events tend to evolve and improve.

Held in conjunction with the AGM, this day is a celebration of cycling in and around BN territory. Several rides begin and end at Sydney Olympic Park.

Held in November each year this event is full of on-bike fun events plus a scrumptious morning tea. This event is held at a number of different venues. See Rides calendar for details.

The Bike North Century Challenge is a personal challenge event for members held on the last Sunday each April. Each small riding group consisting of 2, 3 or 4 riders stays together over difficult and testing terrain to reach the goal of finishing the route. There is a choice of 60km, 100km, 120km, 160km or 200km distances, each of them having significant climbing. All routes have shortcuts which riders can take if they choose. All riders meet up for a post event celebration.

Every Easter Bike North runs a series of rides in a country town. The event is open to all, registration is required.

The events allows riders to enjoy un-trafficked roads, to ride at their own pace, and to socialise after rides. Distances range from 45 km to 200 km and terrain can be flat or very hilly. On days where there are long or difficult rides programmed a less demanding choice is usually offered. Most people stay in a caravan park and there is always a communal HQ set up with an urn, tea/coffee and some snacks.

Launch of the Trishaw

Posted: November 23, 2022
A huge crowd of sponsors, riders and residents made the launch of the trishaw a very special event, at the Shalom BaptistCare aged care facility on Monday this week. At least eight members of Bike North have become trained and … END_OF_DOCUMENT_TOKEN_TO_BE_REPLACED

We have lift off!

Arrival of the trishaw

Posted: November 16, 2022
The Trishaw has arrived! On behalf of Cycling Without Age Sydney North, John Kelman has taken delivery of their new trishaw and has taken it for a test ride. I haven’t seen it yet but it seems to be everything … END_OF_DOCUMENT_TOKEN_TO_BE_REPLACED

Diary of a Nowra Weekend

Posted: October 19, 2022
The skies cleared and the sun shone (unexpectedly) blessing riders on the Nowra weekend with spring warmth.  Thursday saw the early-escapers blow the city smoke from their lungs, to be replaced with the fresh air of the south coast. Today’s … END_OF_DOCUMENT_TOKEN_TO_BE_REPLACED

Posted: September 28, 2022
Sydney Spring Cycle, 7:30am – 10:30am Sunday 16 October Looking for elderly or young, recovering from an injury or with limited mobility or a disability for a Trishaw ride. Accompanying family members will also welcome. Do you have family members, … END_OF_DOCUMENT_TOKEN_TO_BE_REPLACED

Posted: September 14, 2022
Congratulations John Kelman, for winning the Westfields Chatswood Local Hero competition!  It is a fabulous achievement and a well-deserved award. For our Cycling Without Age intitiative, John wins a whopping total of $20,000 ($5,000 for reaching the final voting stage and a … END_OF_DOCUMENT_TOKEN_TO_BE_REPLACED

Posted: September 14, 2022
Celebrate Spring with a trishaw ride! Our next CWA Sydney North ride morning for residents of the BaptistCare Shalom Centre is coming up on Monday 19 September. Join us to welcome the warmer weather (we hope!) and find out more … END_OF_DOCUMENT_TOKEN_TO_BE_REPLACED